This book has been on my radar for quite some time. If any of you know me and my taste in books, you’ll know that I was always going to read Zen Cho’s Sorcerer to the Crown at some point. It’s been compared to (among others) Temeraire, Patrick O’Brian’s Aubrey/Maturin novels, and Jonathan Strange & Mr Norrell, three of my favorite sets of books, so it was really just a matter of time. 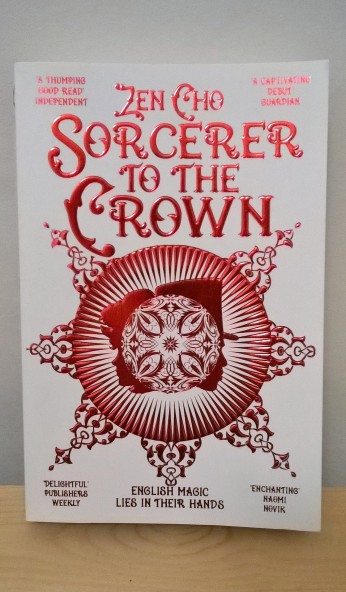 In fact, I was wary at first because of these comparisons; it was difficult for be to imagine how something could live up to the standard of these august works and not be derivative.

In this regard, Sorcerer to the Crown can be seen as a success. The book really grew on me after the first couple chapters, especially after Prunella was introduced. Cho captures quite well the tone and aesthetic of regency-era fantasy, while managing to ask many of the questions that the aforementioned books (for all I love them) fail to ask. With a cast of characters consisting of several women and nearly 100% people of color, Sorcerer is a representational dream. The women of Sorcerer may be the book’s greatest success: in the characters of Prunella and Mak Genggang, and in her description of the organic power of women’s magic,  Cho’s writing shines brightest. Really the only part of the book I wasn’t thrilled with, in the end, was the character of Zacharias, who I thought was melancholy to the point of cliche, though this may very well just be a point of personal taste. Overall the cast of characters is satisfyingly varied and even the secondary characters have (at least hints of) untold depths.

The way Sorcerer talks about magic was another of its triumphs: a clever agglomeration of world magics, replete with fairy realms, dragons and animal sidekicks. The system itself is deftly built with evocative sensory details describing its use, and what’s more, a clear explanation of why its is so appealing to those who use it. Importantly, it also contributes directly to the plot. Like all the best fictional magic systems, it creates more problems than it solves, and though the magical aspect of the conflict is similar to that of Jonathan Strange & Mr Norrell, the overall effect is one of homage, rather than pastiche.

In sum, Sorcerer to the Crown takes its well-deserved place among the ranks of regency fiction. Cho carefully renders regency English society at the same time as she makes it ridiculous. She points out the contradictions and double standards in the fantasy world she has invented, slyly lampooning those same contradictions in factual society, both regency and modern, to often hilarious effect. This book is an enjoyable read with engaging characters, perfect for anyone who wants Austen, but with a bit more action, or Forster, with a few more women. Sorcerer can be purchased here, via Zen Cho’s website, or at your local bookstore.